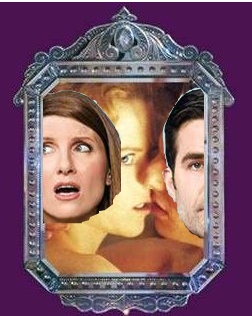 As expected, the fifth installment of the Mission: Impossible franchise is #1.  Maybe it's the incessant tie-ins... or is it?  Who's got the extra income to buy a new car?  Maybe it was the carpet-bombing ad campaign... but I TeeVough'd past most of 'em.  Tee hee!  Of course, stopping by the Stew Beef show couldn't hurt!  Can't pooh-pooh that one... but I get the feeling that the off-air banter was much like Larry Sanders and Jim Carrey.  I'll let you all look that one up... hmm!  Stewart's dad was a physics professor?  He was A Serious Man!
Anyway, Cruise's new movie isn't the only revamped nostalgia piece to do well at the box office.  John Hughes' pre-Simpsons vision of the nuclear family, the Vacation series, gets an overhaul, the first installment of which is called Vacation...  simply Vacation.  Now, as you can see from my crudely assembled visual montage, a lot of different actors have played the character of record the Mortals and Immortals call Rusty Griswold, the long-embattled son of Clark.  In fact, one new actor

for each incarnation.  I dunno; there's either something that playing that role does to the psyche of the actor that makes them want to get back into Shakespeare more, or perhaps it does something to the movie studio making these damn Griswold movies that makes them want to find actors who want less money.  Of course, it's probably both forces at work, but judging from the track record I think the movie studio ultimately won out.  Arguably, there's more cast consistency than in the three latest installments of the Atlas Shrugged trilogy.  Who is John Galt?  Well, it's Paul Johansson in Part One, D. B. Sweeney in part Two, and Kristoffer Polaha in Part 3.  And the weird thing is that they did like the Lord of the Rings trilogy and made all three at the same time!
Anyway, that's it for the debuts.  I hate to badmouth the latest Jurassic movie, but it's slipped to #10 awful quick.  Are people losing interest?  Or are they just pulling it from theaters because they figure it's not going to make more than 600 million at the box office?  1.5 billion worldwide?  Dayamn.  Meanwhile, Jurassic World director Colin Trevorrow is busy preparing his next blockbuster.  What will it be?  Well, judging from his résumé, I'm assumpting it's going to be an overhaul of something he's already made.  Maybe a remake of "Gary: Under Crisis," but with a $200 million budget, that type of thing... or not!  Or he could play it safe and just work on the sequel.  Probably a smart move.  A couple more of those and Hollywood will be your oyster!  You could even make that movie that John Malkovich talked about one time on Conan about a lazy serial killer who spends 90 minutes just sitting in a chair and plotting several things, while watching TV and threatening to kill whoever shows up on said TV next.  Still more watchable than Greenaway!
Posted by The Movie Hooligan at 12:16 AM