The Low Spark of Well-Heeled Boys 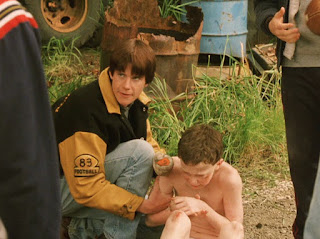 ...miss me yet?  Well, I'll be the first to admit: I'm not the biggest Will Ferrell fan.  But maybe I was just in a good mood a few nights ago.  Did they say he crushed it on "SNL" as the kids abbreviate it these days?  Because I think he did.  Keepin' it ironic, of course, for the all-important Jaded Hipster demographic.  And like me, he's got a thing about all this reality TV, the massive flood of it, which has left all of TV-dom standing in three inches of standing water.  Especially the part where people do interviews about what's about to be shown.  My favourite of course is on "Pawn Stars" when the main guy always says "If this is what I think it is, then it is going to be worth a ton of money."  This was before a 'ton' was called a 's... ton'.  Hard to keep the internet clean, I tells you.
But what else is in the news?  Well, of course Steve Wynn is the latest loser in the "Who's a Sexual Predator Now" sweepstakes.  They only kicked him off the RNC, of course.  It's more of an honorary title, really.  I tells you darlings, if enough of these billionaires get publicly humiliated like this, on Trump's watch... maybe those all-secretive tax returns will finally see the light of day!  I know it's asking a lot.  Silly me, for some reason I thought the recent revelation that Mitch McConnell was able to force Obama into not revealing that Trump is actually a Russian agent would get more traction, but whatever.  I know his constituents don't care.  They like Russia now!  Sure it's cold, and sure, only Putin gets to enjoy the Russian equivalent of the Second Amendment over there, but what's not to like?  There's hardly any black people in Russia!  They like that!  I know that, because Chelsea Handler went over there to look into it.
Anyway, the #1 movie this week is the latest installment of The Maze Runner saga.  They can make a saga out of anything these days, as long as it's selling a lot in paperback.  Is the Divergent series over yet?  Do they have the Blu-Rays for it at Costco yet?  I know they're still limping along to get the C. S. Lewis series of six books turned into, as David Letterman might have quipped sometime in the past, "your genuine Hollywood blockbusters."  I'm still trying to decide which still pic to go with: something from Pan's Labyrinth or from Jim Henson's Labyrinth.  I swear I have the former someplace, if only on external hard drive.  I can still do something with it thanks to Windows 10, if I can find it.  I'm on vacation next week, so this will have to wait for a while.
...and I'm back!  Well, as you can see, I've skipped over the labyrinth debate rather completely, and maybe side-stepped it as well.  For you see, in my travels I stumbled quite across an old copy of 2003's Dreamcatcher.  Stephen King has had many successes in his career, as have Lawrence Kasdan and Castle Rock Entertainment... this is not one of them.  But really, what is the definition of success?  Dictionary.reference.com defines it as ... well, it has many definitions, really.  There's of course the usual American stuff: the attainment of wealth and honors... but really, it's all about the wealth.  More generally, it's the completing of goals, and having them turn out as you'd prefer them to.  Well, one of the achievements that moviemakers hope to achieve is when a person says to their friends, "You remember that one scene in that movie where..."  Or, more generally, to be remembered at all.  Like the movie The Spitfire Grill.  Whatever happened to that movie?  Did it vanish from the face of the earth or what?  Or what about Off Beat?  Thankfully, the movie Dreamcatcher hasn't totally vanished... okay, I'll tell you where I was.  And, incidentally, you can triangulate my location at the time from my credit card records.  I stumbled across it in the DVD section of my local Goodwill(TM) store.  Sure, it was a STANDARD copy, not widescreen, but hey!  American consumers about two or three steps above outright beggars can't be choosers, right?  The scene I remembered from Dreamcatcher was this one somewhere in the middle, where there's a flashback to the main characters' collective youth.  You can sense they were going for sort of a Stand By Me vibe... only different.  The difference in the case of Dreamcatcher is that the heroes stumble across a couple of jocks trying to get a wimpy kid to eat a dog turd.  As you can see, the jock is wearing a glove to protect his hand from the dog turd.  Make a note of that, as you just might find yourselves in a similar situation someday.  But like everyone else who strives to make an impression on the Internet these days, I had to try and do something different.  Brought to you by Dairy Queen.  D.Q. something different!  I had to go and be different and digitally change the dog turd in the jock's be-gloved hand.  I went ahead and turned it orange... I forget why.  Okay, I've said enough... but I could probably keep typing for hours!
Posted by The Movie Hooligan at 9:25 PM