Minions... brought to you by Catastrophe! An eBay original series 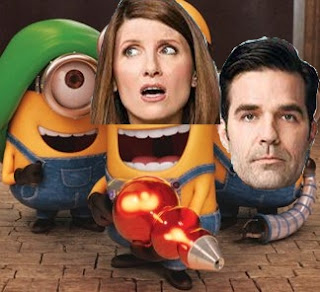 I just can't take it anymore.  For several things today.  First of all, Photoshop isn't working like it did a mere couple weeks ago.  I can't take it.  Gotta revert to Flash, which any professional will tell you is a big reversion, going from Photoshop to Flash.  I mean, now you're just picking the scabs on purpose.  Let them heal, you idiot!
Second, this "Catastrophe" series has finally pushed me over the edge.  Okay, sure, Minions is everywhere and merchandized to death, especially with everything yellow, apparently... but "Catastrophe"?  What is it about this show?  I'm obsessed now!  What on earth does this show have that merits such a saturation ad campaign?  I mean, aside from a so-so plot and no stars?  I know, I know, they're going to be bigger than "Friends."  Then I'll be sorry that I didn't get in on the ground floor of that.  I can't take it.  Just can't.
And thirdly, the IMDb Charts page.  It's supposed to be the top 10.  This week, there's only eight.  This isn't the Oscar for Best Picture here!  This is the marketplace of winners and losers, and there's always TEN WINNERS.  Always.  How do you get eight?  And now with the addition of Self/less, there's nine!  Almost forgot about that one.  It's the latest from Tarsem Singh, but for some reason his name isn't mentioned in the ads.  Guess he didn't like how it turned out.  And yet, Pitof languishes on the sidelines.  But he's luckier than most, I mean what with a day job to fall back on and all.  Plus, look how handsome of a bastard he is!  Doesn't he look like Corbin Bernsen's kid or something?  Bet he lights up a room full of computer nerds slaving away over an Avid when he walks in!
Anyway, back to business.  Minions debuts at #1, big surprise.  It made about $115 million, which covers about half of its advertising budget.  There's Self/less, or another stop on Ryan Reynolds' express train out of Hollywood.  Deadfall or whatever he's appearing in better be really really profitable!
And then there's The Gallows, the latest low-budget horror pic.  It's the same old story: a Jason Voorhees-type goes around killing a bunch of people by hanging them with a noose.  Well, it's an old Hollywood archetype by now, and an artistic challenge to be sure.  How do you make a serial killer more palpable and commercially viable?  Well, he... and it's usually a he... they have to have some kind of supernatural edge, probably returning from the grave.  And you gotta hand it to Voorhees: he may be a zombie, but his physique's, like, way less decomposed.  Next, you make the victims into caricatures, or just teenagers.  So you get a bunch of 25- to 30-year old teenagers from Central Casting and call it a day.  All those young, photogenic, sexually attractive victims?  Why not?  I mean, we had to put up with them in middle school and high school all the time, so it's not much of a stretch to see them killed off in increasingly gruesome ways in a movie.  I mean, Jesus loves everybody, but on the other hand who wants a Heaven full of Uggos?  Egg-zactly.  And third, the method of killing.  Voorhees had his hockey stick with a blade on it, Freddy Krueger's got the knife glove, Pinhead's got... a face full of pins?  Anyway, the Gallows Man apparently has a killer noose.  Of course, killing by noose is pretty popular these days.  I just saw A Walk Through the Tombstones and, SPOILER ALERT, Liam Neeson has to fend off a guy with a garottiere... I'm sorry, it's called A Walk Among the Tombstones, and apparently the wire loop around his neck is a ligature.  And then, of course, there's the mechanized wire loop used on Brad Pitt in The Counselor.  Almost totally forgot about that one!  Too bad it didn't stay forgotten!  And then, of course, there's Ripley's Game.  According to this webpage with the whole script, the wire loop is called a garrotte.... garrote, garrotte, potato, pa-ta-tah.  I always gravitate to the less popular spelling for some reason.  And so we come to a whole list of garrote-centric tales.  God bless you, the IMDb!  ...Cloud Atlas?  Really?  That movie's got everything!  No wonder that didn't do well!  Hugh Grant's got the anti-Midas touch in reverse these days, the poor handsome wealthy bastard.  He'll get back on the John Daly show if it kills him, by Gumm!
And right there at #20, it's Marathon Man.  That's one of my favorites.  I'll probably always think of that any time I see a garotte-based scene, because Roy Scheider gets a one second jump on the guy, and sticks his arm in front of his face when the guy puts the loop around his neck.  But even though Scheider's got his arm taking the brunt of the wire loop, the guy still tries to strangle Scheider, and a little blood starts to spurt out of Scheider's arm.  This is why I'm always surprised when, in a movie like A Walk Among the Tombstones, when a guy's able to wrest himself free from being choked in this way.  And as the Tombstones "goofs" section points out, Liam's neck is perfectly okay afterwards!  Well, they filmed all those post-strangulation scenes earlier.  Liam's a busy guy, ultimately, anyway, and it's on to the next film for him usually.  No time for small details.  So much for that early retirement he used to always talk about!... oh, yeah!  "The Amazing Falsworth."  Another good one.  It could be Peter Hyams' greatest work as a director.
Posted by The Movie Hooligan at 1:00 AM