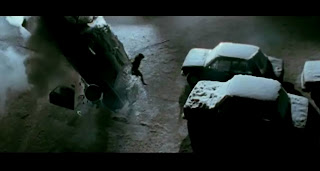 The American President - Just saw a documentary where Rob Reiner mentioned that he offered the part to... the President, that is... to Robert Redford, Warren Beatty, and Michael Douglas.  Now, sure, I could be snarky and say, "Well, he got his THIRD choice, anyway!" but on the other hand, Douglas doesn't think of himself as a director like the other two do.  Then again, Redford was just coming off of Indecent Proposal at the time, so what was he being so snooty about?

American Ultra - In the commercial, Jesse Eisenberg tells someone over the phone, "Oh my God, I just killed two people."  Ah, how the line between comedy and tragedy is blurred these days.  Now, this was written by Max Landis, so clearly this is based on that awkward time in the Landis household in the '80s when... I know, I know, I'm the tasteless one!!

"Catastrophe" -  Yeah, Fools Rush In was fun... boy, maybe it's just me, but I am getting really tired of the incessant Facebook ads for this thing.  This ad campaign needs to be aborted.

The East - Danielle Macdonald and Rebel Wilson were at a premiere last night, and they actually ripped each other's throats out!  No kidding!  Kinda gruesome; thank GOD there's no video of it

Enigma (1983) - This film proves that the Soviet sickle can also be used for the letter "G"!

Fantastic Four Reboot - I know that I should be excited about this, what with the next generation of special effects for guys what jump out of planes in IMAX 3D and all, but c'mon.  Replacing Michael Chiklis as the "Thing"?  I doth protest.  Also, going from Jessica Alba to Kate Mara, I hate to be sexist, and I'm not that big of a fan of Alba, but it still feels like a step down.

Ferris Bueller's Day Off - ...wait a minute.  This isn't in Jonathan Schmock's IMDb Top 4?  You know, the SNOOTY WAITER?  I weep for the Internet.

"The Good Wife" - With Margo Martindale as Willa Eastman!  A woman who successfully championed (an) underdog presidential candidates in Iowa and who hides her intelligence and cunning under a fake, folksy charm, according to CBS!  You're welcome.

Hitman: Agent 47 - Yeah, the 47 Ronin are fun.  I was getting a kind of Punisher sequel impending failure vibe from this, but I'm sure this one will do a lot better.

Night of the Lepus - NOT Janet Leigh's finest hour

North - I'm going to steal my dad's joke... Rob Reiner's writing a new autobiography about his directing days called "After 'North', It All Went South"

The Package - AKA The Expendables 1.5?

Secret in their Eyes - Welp, it took almost 24 years, but this is as probably as close a chance as I'll get to saying... who's the Martin Burney NOW, bitch?

"Sharknado 3: Oh Hell No!" - Yes, too bad the execs at "SyFy" didn't say that a little more strongly.

Shaun the Sheep Movie - Another home run for the Wallace and Gromit guy.  So, what's "Sheep in the Big City"?  Chopped liver, so to speak? ... ah, who cares.  That Mo Willems guy's doing all right for himself.

Southpaw - Oh my God!  They hurt Gylly!  You bastards!

Straight Outta Compton - On the one hand, fans of the early days of rap in the 1980s are going to hail this movie as a triumph, and some may even say that this is an early Oscar contender.  They can do the 'pro' side of the argument better than I ever could; I'd probably throw in the word 'crucible' and try to avoid the word 'def' to give it more grab-it-ass... gravitas.  But then, most of these same people will wonder to themselves "F. Gary Gray as director?  Really?  What, Carl Franklin can't do silver screen cinema anymore?  There's serious stuff in this story too!"

Trainwreck - Everyone's cheering on Amy Schumer... except some of her fellow comedians, of course.  Dave Koz, probably, for one.

Two-Lane Blacktop - Okay, so Monte Hellman's not the greatest director in the world, and this is probably the best thing he's ever done... but you know what he just did?  He put a bunch of solar panels on his house!  Your stock is rising, #2!!!  Sure, he did it just to save money on his power bill, but still!  Give 'em HELL, Monte!  ...I guess he gets that a lot.  Also, if you live in the California area, please visit Sunrun dot com for more information about how YOU can go solar today!... okay, they're website looks a little too generic, but it's really them.

Silent Night, Deadly Night III: Better Watch Out! - ...see what I mean?  Not the greatest...

Vacation - ...holy Crap!  It is a Griswold movie!  I'm just trying to figure out which Rusty Griswold is Ed Helms modeled after.  Probably not Anthony Michael Hall...
Posted by The Movie Hooligan at 12:53 AM

There is a chance you are qualified for a new government sponsored solar rebate program.
Find out if you're qualified now!