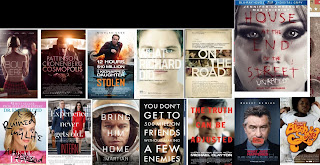 Well, the big news is of course that The Martian was at #1 for the 2nd week in a row, mostly because of Chris Matthews' publicity campaign on MSNBC... I'm sorry, I mean 'msnbc.'  They don't capitalize it anymore.  But for me, the big news comes from Facebook, and the upper right-hand corner with all the games.  And I'm lookin' at it, and what do I see?  Is that Canal+?  The European movie studio?  Are they getting into the Facebook Game bizness?  I think so!  Well, predicting the outcome of the French Football League's not my cup of tea, or rather... my 10-course lunch, followed by cream-laden pastries and wine for dessert, but whatever.  They'll probably make a billion off of it.  And they should.
Well, there's two debuts this week.  The latest incarnation of Peter Pan comes in at #3.  Same thing happened with Spielberg in 1991, but I think it probably debuted at #1, then slowly slipped away... or rather, quickly slipped away.  He should do that more often, because the rebound leads to great things.  Few of us have a 1993 like he had, my friends.  Anyway, the CGI of Hook must seem positively pedestrian compared to the smooth, glossy 3D CGI of this latest one, it says here.  So why do I keep focusing on Spielberg?  Well, for one, Bridge of Spies is coming out soon.  I keep forgetting that a movie's ad campaign can start more than one week away.  For some reason, anytime a movie ad on TV counts down the number of days until the movie opens, well... did the latest Avengers movie do that?  The only example that comes to mind is 1999's Wing Commander.  It came out a few weeks before the first installment of the Matrix trilogy, and it featured the same Matrix effect, whatever you call it.  I call it the Jim Blashfield Effect because he was a music video director from the '80s, and his music videos featured cutouts of objects that would slowly spin... I mentioned that already, didn't I?  Well, even I run out of material, what can me say?  I may have mentioned it, but apparently I never used his name before.  Love that "Search" feature.
...oh, look at that.  Our snarky ol' gossipy little friend Yahoo News has spun a headline that says "'Pan' Bombs at the Box Office."  What are they trying to do, upset the studio heads?  I prefer to think of it this way.  When you see it in the video store, say "Meh" and move on... THEN you can call it a bomb.  Oh, right... or, wherever you browse through lists of movies these days.  RedFlix, NetBox, what have you... Then again, maybe it's just too soon.  I mean, we had Finding Neverland and the Peter Pan from 2003.  Clearly, the market's saturated.
Speaking of slick CGI effects, our other debut this week is Robert Zemeckis' The Walk, debuting at #7.  Okay, so we're probably not going to be talking about how he wanted to put a Delorean in this one in 2045.  Boy, CGI effects are taking a back seat in the movies these days! ...they actually flew Matt Damon to Mars, right?  But Pan and The Walk are indeed opposites in terms of CGI, The Walk leaning towards the realistic, recreating the Trade Towers with Photoshop and a couple of laptops, and Pan leaning towards the fantastical.  Or does Pan try to be hipster-fantastical like Stardust?
Posted by The Movie Hooligan at 12:27 PM