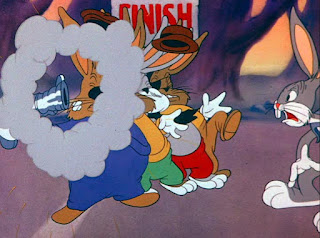 Our next Looney Tunes is another Bob Clampett masterpiece, Tortoise Wins by a Hare.  Sure, it's the same old Aesop's tortoise and hare story... or is it?  Spoiler Alert: I'd be interested to hear the opinions of engineers at the time, as it seems to represent a rare stab at the times' cutting-edge thinking about what Bugs and the turtle themselves refer to as "modern design and streamlining."  Mind you, this one's from 1943, while Rabbit Transit is from 1947, post-WWII, the year of Who Framed Roger Rabbit and all that, and they focus more on the action, and not so much on the mechanics of it all.

I wonder why Bugs never fell off of the WB logo when it comes zooming up.  Work on that, JibJab!  Make it happen.  I mean, the thing comes to a sudden stop.  A real sudden stop.  Even Mel Gibson's stunt guy in Lethal Weapon 2 wouldn't be able to hang on to that!  I guess Daffy at the beginning of Gremlins 2: The New Batch will just have to suffice.  26th anniversary this year, you know!
Also, I'm real disappointed that there's no mini-doc or commentary accompanying this one on the DVD... maybe they're saving it for the Blu-Rays or something.  On the other hand, we don't have to suffer through another self-indulgent Kricfalusi commentary about how he was very personally influenced by this very cartoon by Clampett and all that.  I'm not denying that John K.'s a genius, I'm just saying he stole Clampett's style and added more veins to the characters' eyeballs.  That's all he did!  But, arguably, it was enough for MTV and Nickelodeon, so we can't argue with the success of bad taste.
Anyway, we start, as anyone who's read the IMDb "Connections" page for Tortoise Wins by a Hare, or who's actually seen Tortoise Beats Hare knows, with clips from Tortoise Beats Hare.  New voice-over narration, though!  We're treated to the parts you'd expect to be highlights, including the part where Bugs is skating along the ground.  This part is so enchanting, in fact, that they had to include the part where he passes the tortoise, up to but not including Bugs' massive double take and doubling back to where the turtle was.  The other major highlight is, of course, the part where Bugs crosses the old rope bridge across the chasm, then cuts it down with a knife, thereby influencing Temple of Doom... there's still only one, right?  Incidentally, why is George Lucas trying to add Indiana Jones' name to Raiders of the Lost Ark?  Does it really need to be standardized like that?  Was ANSI just that up in arms about it?  Inquiring minds like mine want to know... albeit not that badly, arguably, so on to the next thing.
As it happens, a frustrated Bugs is sitting at home, watching old home movies, thereby influencing, amongst many, many others, the Robin Williams character in The Best of Times.  God bless Dickens!  For that alone, this cartoon is a work of genius.
The part of Bugs' home movie where the tortoise is raising his front paws in victory at the cheering crowd, well... I'm pretty confident that that part wasn't in Tortoise Beats Hare, and not just because it looks more like a Clampett tortoise than an Avery tortoise.  You'll forgive me if I have a lapse and refer to the tortoise as a turtle.  I thought tortoises were brown anyway.  Ever seen a green tortoise?  ...I'll take this here page as proof that I'm right.  Ah, Sweet Nuggy Vindication.  Brought to you by The Green Tortoise Hostel in Seattle, Wurshington.  The Green Tortoise Hostel!  Because, let's face it, Uber and AirBnB haven't turned every be-goatee'd hipster into a fellow billionaire yet.
Oh, I've just never seen Bugs in such a state.  His fragile ego hangs in the balance.  Lord help him if his enemies Daffy or Elmer ever see this one!  Bugs spits out his mouthful of carrot, and he gives the projector a good swift kick, and a few seconds later we hear the one crash sound we always seem to hear in these here Looney Tunes/Merrie Melodies cartoons.  Lol.  Lol, Larry David!  Lol.  Bugs makes the case to his unseen audience of one that, surely everyone knows that, despite the ending narration of Bugs' home movie, the rabbit is clearly the better athlete when it comes to these track and field type deals!  Bugs sounds a bit like Curly Howard, saying "Certainly!" like Curly, and especially so at 1:57 when he asks "How does that moron do it?!"  It all reminds me of the one retelling of Aesop's fable, where the rabbit wins the race in about four seconds, while the turtle's still at the finish line.  I think Aaron Sorkin came up with it, because the turtle said, amongst other instantly quotable lines, that he's never ever sick at sea.  Must've been Sorkin.
It doesn't quite feel like time for Act Two yet, but we're close.  If we say that Act One begins at about 0:25, when the narration begins (over the credits, no less!  For shame, Clampett... for shame) and the film ending at 7:40, just before the "That's All, Folks," Act Two should be at 2:50 and Act Three at 5:15... but who's counting, am I right?  This is art, not a widget.

Cecil is held aloft at the finish line, and he gives the audience the OK sign with a wink.  Who's the star of this pic anyway?  "Hooray for the rabbit!" the mob rabbits cry again.
And so, when the pushing and shoving comes to a stop, the hidden truth is finally revealed.  Bugs starts crying and literally ripping his metal turtle suit off of his body.  "I'M THE RABBIT!" he cries out.  Why, he even sticks his cottontail in the four mob rabbits' faces!  Lol.  "Eh, now he tells us!" the four of them cry.
Then, the gangster on the left puts a gun to his temple and pulls the trigger.  The other three have their heads in line, and they all fall down, instantly dead... thereby inspiring a similar scene in Indiana Jones and the Last Crusade... you know, where Indy jumps onto the tank and,... ah, never mind.  Is it creepy that I remember that?  I thought so.  If you notice, Bugs reacts when the trigger is pulled.  He's horrified as much as the rest of us, but not more so than today's TV censors, as the cartoon is now typically faded out before the gun goes off.  Maybe the NRA made that call, who knows.  You'd think they'd be in favour of more guns on TV!
Anyway, as I should've said up at the top, for all of you Shrek fans and, to a lesser extent, fans of the Hoodwinked! series, put Tortoise Wins by a Hare in your bong and smoke it!

Order a professional Sparkling White Smiles Custom Teeth Whitening System online and get BIG SAVINGS!
* 10 shades whiter in days!
* Results Are Guaranteed.
* As good as your dentist.
* Same strength as dentists use.