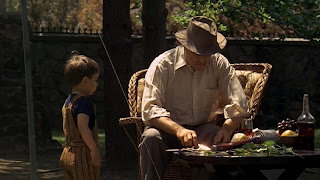 Private Parts - For me, Donald Trump's run at the presidency reminds me of the time Howard Stern tried to run for Governor of New York.  At least Stern had the decency to drop out because he didn't want to disclose his finances.

Man of the Year - Man, if I were Chris Matthews, I'd be bringing up this movie every day this year.

Swing Vote - ...and to a lesser extent, maybe this one.

---
Battle of the Sexes - Oh, it's an historical piece, from the '70s, of course.  It's not something like Just Go For With It or The Ugly Truth, which is a thinly-veiled battle of the sexes in disguise.

The BFG - I hate to say it, but... this one scene from the trailer where the giant's holding up the kid in his giant hand, well... it didn't quite seem to match.  Maybe it will on the big screen.  Another pass through Renderman perhaps?

The King of Comedy - Now that I just finished setting up my dad's new Costco Visa card (suck on that, American Express) I just realized that The King of Comedy invented the Security Question!  Oh, all my film nerds out there know what I'm talkin' 'bout

Liberty Stands Still - Another mass shooting.  Now, sure, some of the more cynical among us are going to say "Oh, a gay nightclub in Orlando?  Makes sense.  I'm surprised more of those don't get hit!"  Others of us might be asking, well, is there any kind of victim that would make the NRA stand up and take notice?  Well, not that I'm condoning anything, but Liberty Stands Still just might have the answer.  A little planning, a very narrow window of opportunity... ah, never mind.

"Silicon Valley" - Officially caught up, for now.  Personally, I would've tried wandering down the path where Big Head is the CEO of Pied Piper, and Richard Hendricks kind of pulls the strings as CTO, more or less... or did I just guess Season 4's arc?

Three of Hearts - I was going to make a witty observation about trends in romantic movies over the years ... of course, I'm not sure how one would pigeonhole something like Three of Hearts.  Maybe the proper category is "Hollywood Stumbles Yet Again with Lesbians."

Without a Paddle - I think I know why this isn't the beloved classic the filmmakers thought this was going to be.  I mean, check out the poster!  So weak.  It was their big chance to do an homage to that filthy t-shirt, "The Happy Fisherman," and they blew it.  Totally blew it.  (Google that at your own risk, BTW)