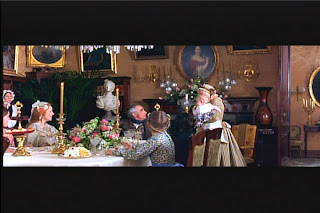 All right, let's get this over with. We've got about 3 hours before the damn thing starts. What new features are they going to have this year to speed up the process? A live blog where the winners get to say everything they wanted to? Some kind of assembly line? Let's face it, folks: America's at the bottom of the list of countries that have the most fun. I say, if it takes 5 hours, let it take 5 hours! We gotta compete with Otro Rollo sometime!


So, what do we have left? Well, before I saw The Departed I was predicting a Scorsese sweep, and I don't think I heard any critic badmouth the movie. And then, I saw it on DVD. Sigh. Well, my close confidant was really down on it, more so than me, lumping it in with other Scorsese disasterpieces like New York, New York and Gangs of New York. Those are the big two. I'm a little more positive, and I say at least Gangs of New York had some production value and got out of that ballroom once in a while. Costco has also responded to a changing marketplace; the latest Scorsese 4-DVD collection features GoodFellas, The Aviator, The Departed and Mean Streets. Well, 3 out of 4 ain't bad. The previous one had New York, New York in it; I can't remember what else.


Time once again for the heading: What makes a bad movie bad? My confidant called The Departed a GoodFellas remake, but with the Joker from Batman, which I find an apt description. You know, reliving the glory days of Witches of Eastwick as the ultra-cool ladies man, 3 ladies at a time. And why not? With a re-locale to the mean streets of Boston this time. A little more parking on the streets out there, I guess. And somehow it's more profane than even GoodFellas was. The difference is that GoodFellas' language was less misogynistic. (not as much domestic violence in The Departed.)
At times the movie seemed like its own trailer, as plot developments were being crammed down our throats. And yes, that's a bad thing. If you had to pick from the Internet or cellphones, to decide which technological development is more likely to destroy movies, after watching The Departed I'd say cellphones. Remember Cellular? At least they didn't spend all kind of time sitting quietly in front of a laptop like in Assassins. What was that all about?


(spoiler alert) Also, I guess I was the only one who remembered this, but the ending reminded me of The World According to Garp, which ends with everyone getting shot. Original at the time, but what price originality, I say? So in summation, there is no Dances with Wolves this time to take away from Scorsese's Oscar gold, nor was he backed by one or more Weinsteins this go-round, so he's a shoe-in for an Oscar this time. But who knows, maybe the Academy will still shy away from rewarding extreme movie violence and give it to Babel instead. Better make The Rise of Theodore Roosevelt the best thing you've ever made, Marty.


---
Now, on to the rest of these damn Oscars. Best picture; I'd like to say Babel, as Jon Kilik once worked with the Coens and he'll finally get some gold, but I'm going to say The Queen, because isn't it time to reward some class?


Best actor, well, Peter O'Toole got that one award at the Oscars a while back and he got to make a speech, so I'm going to give it to Forest Whitaker, but really, the Academy'll be voting for Spicoli from Fast Times at Ridgemont High.


Best Lead Actress; well, Taylor, I'll go along with everyone else and say Helen Mirren. Still, is there a slight chance Cruz could pull out a last-minute victory? If so, it's only because the Academy loved her so much in Woman on Top.


Best Supporting Actress: Scandal, indeed! How could Blanchett get nominated for Notes on a Scandal and not Babel? Or The Good German? Well, like Clooney once said, either way she'd lose. I'm going with Abigail Breslin, because I'm not ready to never hear the end of another accolade for American Idol. Look out, Anna Paquin and Keisha Castle Hughes, you've all been bested!


Best Direction; I'll go with another longshot and say Paul Greengrass for United 93. Why not. Wouldn't that be funny if I turned out to be right? :)


Best Cinematography; despite my prediction of a Pan sweep, I'm going against the grain here. It's a contentious field by men with their best work behind them. I'm sure Vilmos is tired of being known for CE3K. I'm going to say the two magic pics will split the vote, and Children of Men will get it, but only because the Academy really wanted to vote for 12 Monkeys.


Art Direction: Lots of set decorators nominated this year! I never noticed or cared about that before. Well, I was going to say Dreamgirls so that Coen co-conspirator Nancy Haigh could get some Oscar gold, but looks like it's going to that former Coen co-conspirator Rick Heinrichs, who's left them far behind and enjoyed greater success with Tim Burton and the pirates. Godspeed, Heinrichs, ya Kraut!


Best Costume: Normally, I'd say the winner's Colleen Atwood but she's surprisingly absent this year. There are, however, five very costume-oriented nominees this year. I was going to predict Dreamgirls, but The Devil wears Prada was number 1 with 27 million dollars. Gotta go with Prada, because Prada does work in mysterious ways.


Editing: Well, Schoonmaker's already got Oscar gold in the bag, so she's out. Gonna have to go with Stephen Mirrione, because Babel is the best Traffic-esque film he's won for since, well, Traffic! Need more be said? I submit that more need not!


Best original song: Melissa Etheridge, snowball in hell's chance. That leaves 3 from Dreamgirls and one from Cars. Now, normally I'd pick a Dreamgirls song due to that whole... what do you call that theory? You throw enough glue against the wall, and some of it is bound to stick. What do you call that theory? Also, Randy Newman already won for Monsters, Inc., but Cars did make more money than Dreamgirls so I'm going with Cars. I mean, seeing as how he put such a great effort into his last Oscar speech, who wouldn't want to hear him get another one? Of course, everyone will really be voting for Randy's song, Political Science, which he performed most recently on The Colbert Report. Lotta Colbert-heads out there in the voting Academy.


Best original score: Well, no John Williams or Danny Elfman this year, that's all I need to know. And I don't think we need another Newman to hog all the awards, thank you very much. Gonna go with Philip Glass for Notes on a Scandal, even though it's really a vote for The Thin Blue Line.


Best short documentary: I'm predicting what always wins: the documentary with a colon in the title, and this year it's Two Hands: The Leon Fleisher Story.


Best foreign language film of the year: It's Pan's Labyrinth, and they're just lucky that Babel wasn't in this category! :)


And then of course, there's the nerd oscars. I couldn't believe it, an award actually goes to a camera this time (Arriflex; look on eBay, you'll find one...) and not just George Lucas's latest software bundle. A clear victory for the neo-Luddites. Host Maggie Gyllenhaal? I thought they usually went with Esquire's Woman of the Year, which would've been Scarlett Johansson. Maybe Esquire should stop robbing the cradle for a while.


While they can't give an oscar to Al Gore, twelve hippie types won for ... "For their contributions to the environmentally responsible industry conversion from silver-based to cyan dye analog soundtracks. " Okay, but, some are going to say it's the Beginning of the End! Not me, of course.


And finally, another Lucas protegé Richard Edlund gets the Army's Medal of Commendation ... wait, that's an Oscar? Hmm! Never heard of that. He's getting it this year because The Judas Project is making a comeback in popularity, and last month it finally broke even! It's all profits from now on, baby. It was all worth it.

Man, these Oscars have worn me out. But sometimes you gotta do these things, and if you're in the biz of reviewing movies there's almost nothing more important than your opinion on who's gonna win. And so there you have it. I think the second most important thing is knowing what movie you'd take with you to a deserted island, because that's still the cartoonists' scenario, isn't it? Picture it: you're trapped on a deserted island with only five feet of sand around you and the one palm tree to lean up against. Now, assuming it's not the back of some large submerged turtle, what one movie would you want to have with you that you would watch til the end of time, which would only be a couple years given the current rate of ice cap meltage; again, assuming it's not a ginat turtle that could float with the rising tide. I've given this a lot of thought, and the movie I would of course want is Cast Away. Duh! I'm outta here, you bastards. :)
Posted by The Movie Hooligan at 1:38 PM