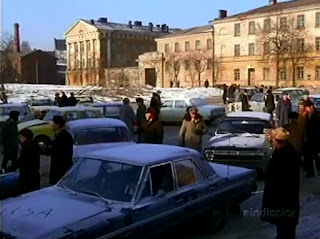 Burnt - Yeah, this is what Hollywood's all about right there.  Well, it's that one image from the trailer - Bradley Cooper in sunglasses and a leather jacket.  It's a long and proud tradition, going all the way back to Brando in The Fugitive Kind.  If the tradition goes back further than that, well... I just don't want to know about it.

Cancer Pimp - Can't badmouth this one; a friend of a friend worked on it.  Here's the film's official site...

Chef - ...really?  That's the title?  I guess it was available.  Well, Chaplin probably did a short in 1907 or something called "The Chef," and it just became available.  Boy, copyright law's a bitch!

Dinner Rush - I need to get out of these movies about kitchens more.  The heat's okay, but the dramatic tension's a little boring

Garbo Talks - Had this on TV today (Sept. 17).  I saw the scene with the bright orange hallway; I believe it was in the hospital.  They actually teach that scene at USC Film School, in one of the basic cinematography courses, and I believe it's in Stephen Burum's "American Cinematographer Manual" on Chapter One.  Chapter One's actually called "NEVER SHOOT A SCENE IN A BRIGHT ORANGE HALLWAY."

Group - First of all, Timecode was fun.  Second, here's the secret to getting ahead in show business: annoy the f... sh... crap out of your co-stars.  ALL HAIL RITA!  ALL HAIL RITA!!!!!

Mistress America - Thanks to inexpensive digital film technology, Noah Baumbach is well on his way to being this generation's Woody Allen, in the sense that he will put out one film a year for the rest of his life, come rain or shine.

Ms. 45 - Boy!  You just never know what movie from the past is going to get a modern shot in the arm!  In the case of Ms. 45, the legacy of actress Natalie Rannazzisi, mother of superstar actor and comedian Stephen Rannazzisi, is finally achieving national prominence.  He apparently told a fib about surviving on 9/11.  His IMDb Bio page is probably going to change soon, but for now it says that he was on the 54th floor of the tower that didn't get hit first.  Well, survivor's grief doesn't seem to be hurting or helping his career terribly much.  I can't vouch for 9/11 survivors, but I am thinking of the Chilean coal mine disaster.  An actual survivor of that kept going back to the mouth of the mine, and was very, very suicidal generally.  Of course, that miner probably didn't look like the reincarnation of Craig Sheffer!  Look at that rugged mug.  Well, Comedy Central may not forgive you, with their pro-9/11 agenda, but I do.  I mean, he was the studio gate guard in For Your Consideration, for God's sake!  The studio gate guard.  Or, maybe you could just do like Charlie Sheen, except say "Um... ACTING!  Hel-LOOOO?!!"  ...boy, these Rannazzisis breed like flies!  How many of them are in this thing called "The League," anyway?

No Reservations - How many of these chef movies ARE there?

Olympus Has Fallen - Brought to you by Nikon.  They keep on having these small ads for it on Facebook, so I had to double-check for myself.  It's Morgan Freeman, Jason Bateman and Ryan Reynolds, right?... oh, right.  That was The Change-Up.  Oh, critics.  You just don't get it.  Fountain pissing is here, and it's here to stay.

Ratatouille - Now, I'm as Malthusian as the next guy, but... a rat pulling a guy's hair.  Yeah.  Also, I'm afraid I'm still a germophobe; there was a period there for a couple weeks after seeing the movie where, sure, I invited all the rats from the neighbourhood into my home to join me at the kitchen table, but after the third visit to the doctor for the Hanta virus...

We Are Your Friends - ...we're just a little short on cash right now.