Okay, so it doesn't make sense now to start with the second installment of the "Hunting Trilogy," but I personally think that Rabbit Seasoning should be seen before Rabbit Fire, as Rabbit Fire clearly has the more satisfying ending of the two.  If I remember Duck, Rabbit! Duck! correctly, it's the ideal end to the trilogy, as it has a completely insane Elmer heading off into the horizon where he belongs.
But where to begin when discussing this trilogy, these short variations on recurring themes throughout the Looney Tunes canon entire?  If only there were some sort of blog dedicated to these things... that was a little more easily searchable..... what can me say?  I go through my old posts and sometimes think to myself, "Wow... where the hell did THAT come from?  What on Earth was I trying to convey?"  Hence my not working for a newspaper.  I think the main thing is to not overly apply logic to it, just try and enjoy them as they are.  As for Rabbit Seasoning in particular, if you've seen 2003's Looney Tunes: Back in Action, and you should, you might recognize the opening scene, as it's practically shot for shot the same as Rabbit Seasoning, at least the fonts used in the signs.  They're virtually all the same.  I know, I know, another good project for me to work on.  Time to dip into the archives once again...
...maybe later.  Anyway, we find Bugs once again under siege, surrounded by enemies.  Daffy's trying to use the institutions of government to have Bugs eliminated via an accident, and Elmer, well... Elmer's never been in a sorrier state.  Bugs is once again showing the guy little to no respect.  Note how Bugs puts his elbow on Elmer's hat!  Note it!... okay, here it is on the YouTubes, for now... ah, the price we pay for tiptoeing around copyright law.  But the reason that Elmer's hit rock bottom, and Daffy seems to pick up on this, is because Elmer says to Bugs that he hasn't had any luck hunting rabbits because he hasn't even seen a rabbit yet... that's right, folks.  Elmer the hunter says that to Bugs Bunny.  This is why Elmer will never get anywhere in his 2016 bid for President... well, maybe as a Republican, sure.  That is, until people find out he's for reasonable restrictions on guns: you know, background checks, magazine size, what have you.
Alas, Daffy proves to be far more clueless than Elmer.  From a negotiations standpoint, Daffy's just trying to get Bugs killed.  Is that asking so much?  From a film historian standpoint, the scene where Bugs and Daffy "run through that again" has got to be some kind of a first.  It's been done to death since, I'm sure.  And from a legal standpoint, it happens any time one of the lawyers need the stenographer's transcript read back to them.  The worst example of that is, of course, is 1991's Bingo, where a court stenographer reads back the testimony of a dog.  That's right... she just barks.  Oh, writer-director Matthew Robbins.  He spent his whole career undoing the damage that his association with Close Encounters of the Third Kind did, and as a director, Bingo seemed to be the final nail. 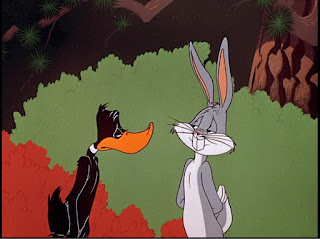 I think my favourite scene in this whole affair is in the following picture to the left... I know, right?  What's the deal, The Movie Hooligan?  More than one pic per blog post?  Well, it's just that big a deal, I tells ya.  I think this is after the third time Daffy gets shot.  I don't know what the exact term for that look is, but it's perfect.  But that's Chuck Jones for you.  That's why he's the most beloved of the Looney Tunes directors.  The second, of course, would have to be where Daffy goes "Nyah!" at Bugs, sticking out his tongue, a second before getting shot by Elmer.  I couldn't help but think of one of the first Foghorn Leghorn cartoons where he interrupts his train of thought to say "The boy doesn't pay attention!"  I hope I have that one on DVD.
But even a classic like Rabbit Seasoning is prone to plot devices.  At this juncture, Elmer declares "I'm sowwy, fewwas, but I can't wait any wongah" and proceeds to unload the infinity clip of his shotgun at the duo of Bugs and Daffy.  Off they run to make work for the background artists.  The veritable Defiant Ones duo hide in one of Bugs' summer holes, and Bugs asks Daffy to check to see if the coast is clear.  In this brief moment, they are a pair.  Is all forgiven?  Kinda feels like it.  But I guess, if you're Bugs, you're not one to hold a grudge, as long as you can outwit the grudgee in question.  Daffy gets shot, but seems to have injuries more in line with a severe bashing.  Daffy passes out after his punchline, and it's on to what's either Plan B or the final conceit of the picture.  Yup, time for Bugs to dress up as a dame.  I am the Garth Algar Percent! (the part about Bugs Bunny)
Daffy comes to his senses, and back to his old agenda.  He still seems to want Bugs to be dead, but he's just more upset at Elmer.  "Surely you're not going to fall for THAT old gag?!!" Daffy asks the blissed-out Elmer.  "Isn't she wovewy?" asks Elmer.  Bugs' costume is apparently more convincing than that of Rabbit Fire, and the consequences of the gender deception in that one were far more severe.  Here, Bugs is eventually unmasked, but Elmer lets the whole thing pass.  Again, plot device.  And so, we come back to the conceit introduced earlier in the picture when Bugs once again asks "Would you like to shoot him now or wait 'til you get home?"  It's the end of the picture, so it's time for waiting until Elmer gets home.  I take these things far too seriously now and I can't help but conflate the long shot of Elmer's cabin to a similar scene in Schindler's List, but once again, Daffy emerges scathed but fully conscious and able to walk back to Bugs, his sense of self and outrage intact.  "You're despicable!" utters Daffy.  Now I need to find the one where Daffy says "You're" three times... holy Crap!  I saw this once at a film festival in Seattle, I think!  They showed a bunch of them.  Doesn't happen often enough for my taste.