The Mouse that Narrated 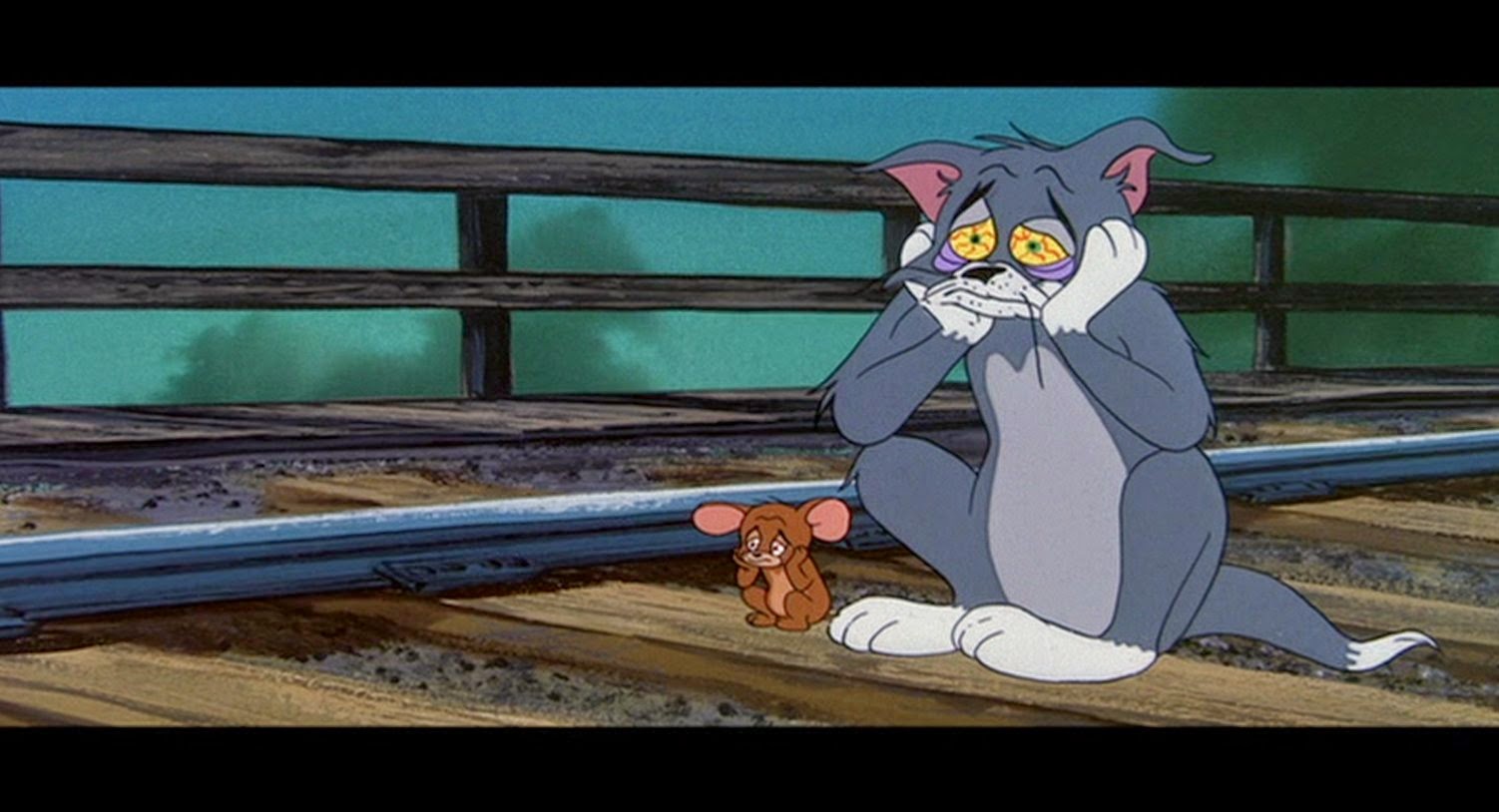 I must not be looking forward to writing this review or something, as I can't seem to start it.  So let's get it over with.  Well, it is the last Tom and Jerry I'm planning on reviewing in the foreseeable future, as it is the last one on the DVD I got.  Then again, there's that time I bought a DVD recorder and started burning stuff left and right.  Incidentally, I think those are relationship killers, but maybe it's just me.  You'll probably do just fine in your life.  One of the DVDs I burned was one of a bunch of Gene Deitch Tom and Jerry cartoons.  Alas, I didn't get all of them, but why should that stop me from conducting a review?

But we'll save that dilemma for later.  For now, whosoever put together the Spotlight Collection DVD must have a rather warped sense of dark humour in picking this last Tom and Jerry cartoon to be the last one.  It's called Blue Cat Blues and, as you might be able to divine from the provided picture, 1) I'm having some trouble formatting the blog text, but 2) in the picture proper, Tom and Jerry look kinda depressed.  And once you start watching Blue Cat Blues, you'll see that clearly this is a 180 degree turn from the sickeningly sweet positivism of Smitten Kitten.  At least, not for our Tom and our Jerry...

Wikipedia's usually a help when it comes to figuring out the stuff for your next Comp. Lit. class, but yes, you're right.  Generally, these cartoons are non-trailblazers when it comes to setting the literary world on fire.  Only once in a generation does a writer like Tennessee Williams come along and turn the Puritan American culture on its collective head.  Or maybe Blue Cat Blues is doing Steinbeck's "East of Eden."  Then again, the story here is far too ordinary for Tennessee, at least until the end.  Alas, Wikipedia is no help.  But this cartoon still seems like Tennessee to me, and if memory serves, MGM owned his proverbial ass!
Nevertheless, it's a pretty simple love story.  You may have read it and/or experienced it: boy meets girl, boy falls in love, boy loses girl, ... and a few steps in between.  Of course, in this case, boy cat sees girl cat, boy cat falls in love, what have you.  Surprisingly, we start off much like The Truce Hurts in its Second Act, with mouse and cat being friends!  Drinking lemonade together!  Cue the watered down Itchy and Scratchy... And then, she walks by... and Tom notices.  As the voiceover narration informs us, Tom flips his lid... dayamn!  I'm kinda flipping my lid myself!

Of course, with a high maintenance gal like that, you must give your life over to her.  Every waking moment you once had to yourself, everything you own, everything you can borrow and steal... all must be sacrificed.  So worth it, though.  "Tom was putty in her paws... hands," the mouse informs us.  She molds Tom's face so that he looks like a donkey.  This is why the cartoon can never be shown in the South.  Evolution, my redneck ass!
And then... he shows up.  The white girl cat has found another guy that she likes better... well, actually, she seems unimpressed with either gentleman, but she likes the swag!  She'll gladly accept swag!  Tom tries flowers, but the other guy... "Butch," I believe his name is... has outdone Tom once again.  That Tennessee Williams guy was smart.  Tough names, memorable names.  Brick Pollitt.  Valentine 'Snakeskin' Xavier and his magic guitar and motorcycle.  Dr. Cukrowicz... I mean, Violet Venable.  Why, Tennessee's own first name was Thomas!  Boring!  How can you be a great writer if you've got such a boring name?  A much harder row to hoe... well, I still think I'm on to something here.

That poor fool Thomas Cat... he still thinks he can compete with the far richer Butch.  The big finale is that Tom spends his last nickel on a car.  Unfortunately, he's acting out of sheer desperation and gets the cheapest car he can find.  I believe it's an old steam-powered Newcomen.  Butch easily defeats Tom with one of those long stretch jobs.  I believe there was one in Lonesome Lenny and Peter Gabriel's video for 1992's Steam.
And so, we end as we began, with the man in the woman and... oh, wait, that's Blood of Eden.  I mean, we end with Tom on the bridge of train tracks, with Jerry looking over him like a proverbial guardian angel.  That is, until Jerry Mouse realizes that his own love life is just as fragile as Tom's, and when he sees his own girl mouse driving around in some other dude's car, well... he's not one to engage in slut-shaming, but forget you and forget that other mouse too.  Jerry's depressed as hell and sits by Tom's side as the train approaches.  We only hear the train's horn, and we don't get any light reflected off of the backs of Tom and Jerry.  But for those of you who absolutely need to see Tom getting hit by a train, perhaps I'm Just Wild About Jerry is right up your alley.  ...oh, do I have to do YouTube links for everything for you people?!!!
Well, cheer up, Tom.  Showbiz is a cruel mistress.  It's the price you pay most of the time.  Things work out for Butch and the crazy white girl cat, but you get your own piece of cartoon immortality, not Butch.  Butch (the cat, not the bulldog) is just a supporting player in your world.

Good double bill with: Symphony in Slang - similar premise, but the guy gets the last laugh... or does he?

****
-so sayeth The Movie Hooligan

Posted by The Movie Hooligan at 6:24 PM

Order a professional Sparkling White Smiles Custom Teeth Whitening System online and enjoy BIG SAVINGS!
* Up to 10 shades whiter in days!
* Professional Results Are Guaranteed.
* Better than your dentist, for a fraction of the cost.
* Same strength as dentists use.