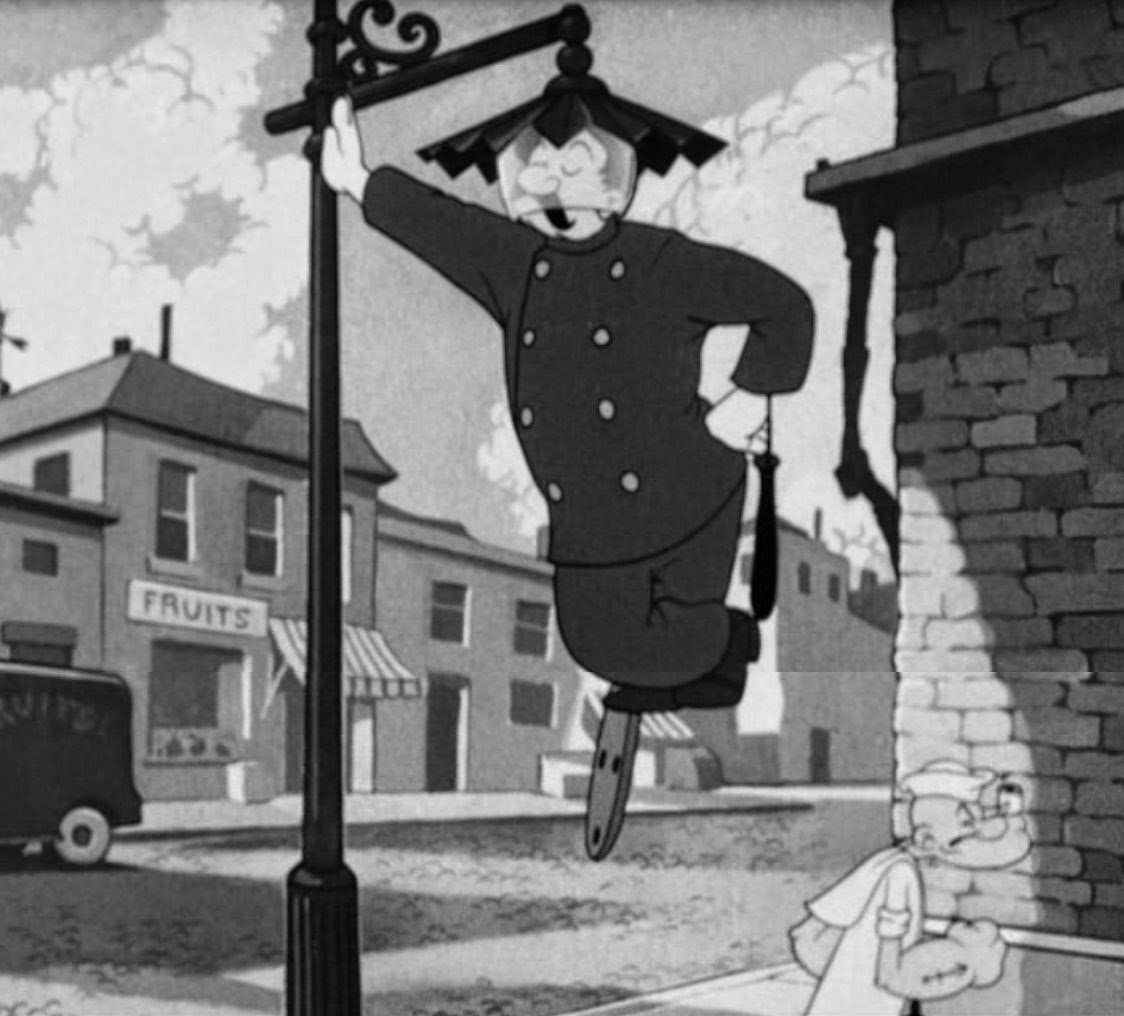 Well, Popeye's still in the Navy, but he's taken a long break from stereotyping either Germans or Japanese.  I'm starting to think that the studios got complaints when they made those few cartoons with extra-heavy stereotypes; otherwise, it seems like there would be a lot more of them.  But Popeye's got other thematic tricks up his sleeve, and the vaguely titled Happy Birthdaze might not prepare you for the darkness to come.  Even I was a bit taken aback!  Or maybe I'm just getting old and touchy.  Probably the latter, yeah, that's it.

Scene: the Naval shipyard, where everyone's getting a letter.  Popeye gets a letter from Olive about a birthday cake waiting in the wings.  It's Popeye's birthday; I guess he would have been around ten by the time this cartoon was released.  Sure, he was more like fourteen, but who cares about the original strip he appeared in?  Am I right?  The Fleischers are the thing!
And so, much like the Fleischers' earlier color classic, Dancing on the Moon, all is right with the world... except for one guy.  A guy we'll call Shorty, because that's what Popeye calls him.  Shorty didn't get a letter from the V-Mail truck, and so he has no other choice but to take out a gun and blow his own brains out.
But before that happens, Popeye takes Shorty's gun away and he tries to make Shorty feel better.  Surprisingly, it works!  That is, until Popeye says that Shorty looks like Bob Hope.  Shorty gets another gun out and places its barrel to his temple.  Popeye says "I mean... Bing Crosby!"  Ask your great-grandparents.  Shorty is once again in a swooning state, so much so that his face morphs into a Bing Crosby-type face.  Which is why this cartoon is banned from television.  We won't be having any four-eyed uggos changing their faces around without plastic surgery!  No sir!  Not on my watch.
And then, the mistake of mistakes: Popeye invites Shorty to his birthday party.  Cross-fade to Olive powdering her face... with makeup!  With makeup.  This is nothing if not a family picture... I mean, aside from the numberous suicide attempts.  And then... much like we found out about the Stooges, even a venerated institution like the Popeye shorts tries to cut corners every now and again.  But they gave the rostrum camera guys an extra couple hours of work with this scene: Olive walks to the front door.  We can hear it from out in the hallway.  Her footsteps are loaded with such enthusiasm that the entire building seems to tremble from it.  It's as if Olive weighs a few extra tons or something.  The door flies open and Olive gives Popeye a big kiss.  Tastefully, they go up the stairs and all we can see is Olive's be-shoe'd feet.  And yet, everyone goes on and on about how great the spaghetti "kiss" in Lady and the Tramp is.  Has anyone actually seen the movie?  I mean, have they seen it?
Popeye says "I want you to meet a friend of mine... Shorty!"  Olive lifts Shorty up and gives him a tiny kiss.  Shorty starts to float in the air.  I wonder if Popeye's regretting his decision to bring Shorty along yet.  Shorty keeps floating, but the promise of food brings him back to earth.  Specifically, birthday cake.  Olive hasn't finished making it yet.
But first, Shorty must wash his hands.  As Lord Lister says, cleanliness in all things, even the humblest of tasks.  Alas for Popeye, the water has multiplied exponentially-fold when Shorty runs the tap and, much like the big finale in the Laurel and Hardy classic, Brats, Popeye gets washed down to the ground floor by the water.  The water level in the bathroom slowly drops, and we find Shorty brushing his teeth.  Apparently, the kitchen is unaffected.

Scene: the gutter, where Popeye tries crawling out, but has to time his emergence from the gutter so that he doesn't get hit by a speeding car.  The city's crazy, but is now just crazy enough to drive sane people to the brink.  Popeye gets back upstairs and is ready to strangle Shorty, but changes his mind when he hears Shorty's sweet song about his pal Popeye.  I'm put in mind of Sloppy Moe's song in Wagon Heels.  God, I love cartoons.  Where else can you see a beard turn into a hand?  However, I don't think Sloppy Moe was voiced by Mel Blanc.  Clampett tended to use other voices.  Blanc could do quite a bit, but sometimes you just need an Arthur Q. Bryan to be Elmer... where was I?  Oh, right.  The cake.  Shorty's helping Olive in Popeye's inexcusable absence.  Shorty's got all the ingredients in one big, completely safe, tall stack.  Then Olive says "Oh, and a dozen eggs!"  In Shorty's nerd, fanboy zeal, he rushes to get the eggs, leaving Popeye to catch everything that's now flying in the air.  Upon Shorty's just-as-hasty return, Popeye ends up with the cake ingredients all over his dumb ass.
Next scene: Popeye's got all the broken dishes in his arms, and is ready to dispose of them... but he needs Shorty's help to open the door.  How can Shorty screw this one up?  Well, with a nerd like Shorty, you must be very specific and not allow them any freedom of interpretation.  Shorty opens the door closest to him, which happens to be the ironing board door, that cartoon staple of old, and to a lesser extent, Stooge-film staple.  Popeye drops the dishes anew, much like in Cops is Always Right.  "Go take a bath!" orders Olive.  "Oh boy!  I'll run the water," says Shorty.

An almost perfect place for an Act break!  The clarifying Noah-esque flood puts Popeye back in the ground-floor gutter, but he climbs out through a manhole cover this time.  I'll leave the fetishization of the policeman's moustache to blogs finer and more popular than mine.
Next scene: the cake is ready to be put into the oven, but Shorty's now depressed about Popeye not having any fun on his birthday.  Olive, in addition to trying to get that cake into the damn oven, has to take another gun away from Shorty.  See?  Suicide can be funny in the proper context!
And so, Popeye returns with a baseball bat in hand.  Shorty, in classical nerd fashion, misinterprets Popeye's intent of murder and mayhem for one of fun.  Shorty switches to game mode.  "You ever see Babe Ruth hit a homer?" asks Shorty.  Ah, those were the days.  Of course, according to the Wikipedias, the Sultan of Swat's last appearance was May 30, 1935 for the Boston Braves.  Better make sure I parse that right!  But whatever.  Even Skip Bittman knows an icon when he sees one.
In Shorty's excitement, we go from baseball to golf to ice hockey!  Ice hockey, for f... God'z zake.  No sooner is Shorty strapping ice skates onto Popeye's feet than Popeye's got the puck in his mouth... that sentence is probably not grammatically correct.  Oh well.  This is a blog!  Who's got the time?
The point being, Shorty's attempt to make Olive's living room into an infinite playing field have surprisingly disastrous consequences.  As opposed to, say, the infinitely large train set in that one Tom and Jerry cartoon, Kitty Foiled.  And, much like the principles of judo, Popeye's attempt to slow Shorty down a little bit invariably set the stage for his own downfall in the form of a circular hole in the floor.  Popeye takes a mighty swing, ends up twirling around really really fast, thereby cutting a hole in the wooden floor with those dangerous, dangerous ice skates.  But Jack Mercer does get to do a rare stuffy character in the form of a stuffy downstairs neighbour.  Actors like that kinda crap; D.Q.'ing something different now and again.

To cut to the chase, Popeye and Shorty end up in the basement furnace, Popeye with birthday cake all over his face.  Olive herself ended up in said furnace, and she emerges from it, covered head to toe in soot, telling Popeye to never darken her door again.  There's a joke there someplace.
Cut to Popeye and Shorty inside the furnace.  One candle is still lit on a bit of cake stuck to Popeye's head... I mean, it's in his pipe.  Just re-watched it.  Boy!  Some memory I have.  Ever the optimist, able to find a grain of joy on the proverbial Beach of Despair, Shorty says "Can I blow out the candle?"  Not waiting for Popeye's answer, Shorty blows out the candle anyhow.  Shorty may be a smart man, but he seems to lack the ability to read peoples' body language.  Or maybe, like all great entrepreneurs, maybe it's best to just ignore body language altogether and just concentrate on what it takes to get people to buy your product.  Your shoddy, popular product.  Alas for Shorty, Popeye's kind of not in the mood for what sweaty optimism Shorty's selling.  A shot in the dark rings out, and Shorty falls silent.  The words "THE BITTER END" fill the screen.  Maybe Shorty's sleepy!