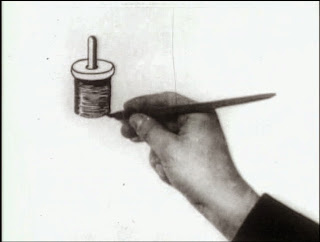 What is the deal with these hands drawing stuff in these early cartoons?  I guess it's like how, when sound first hit the market in 1929, people for a while thought of film as a version of Broadway theatre.  At least it was the case with the Marx brothers, with their references to Playbill and Eugene O'Neill.  They soon dried up, however, when film slowly became its own medium.  By the time they got to Duck Soup, no more Broadway references.
But back to the instant theme.  Now, maybe it's not always the case, but there seem to be themes with these here Koko cartoons.  The Clown's Little Brother is about sibling rivalry, that other one called... (The) Cartoon Factory is about... some sort of factory, and the next one, completing the DVD trilogy, Koko Needles the Boss, is obviously a coded Marxist, Freemason screed... I mean, it's about sewing, sort of.  Max's busy hand draws a spool of thread, and the background gets threaded instead of drawn, because let's face it.  Even Max Fleischer got tired of cartoons that start with the background getting drawn.  Koko eventually gets sewn into place, then the very fabric of paper holding him together gets ripped!  Plot device: the perfect opportunity to sew him together.
Then, Koko tries to help Max thread an animated needle, but after Koko gets poked in the eye with the thread, all bets are off.  Koko and Max start fencing: Koko with a needle, and Max with his nib pen.  The sewing theme would show up later on in Betty Boop's Crazy Inventions when an early sewing machine runs amok, sewing anything and everything together... a ladder?  A river sewn shut?  Insane-ity!  Inane insanity!
Then, later on, when Koko escapes the confines of the easel, he starts trying to tie Max down with thread, much like what happened to the giant in Gulliver's Travels... the Fleischers' Gulliver's Travels, not that Jack Black one where his stomach starts sloshing around at some point.  Well, he's not as fat as Farley was, anywho!  The kitten, seen earlier in The Clown's Little Brother, makes a reappearance here and gets lassooed by Koko.  Koko ends up in the inkwell again... well, just his hat, anyway, and a piece of thread attached to the top of the inkwell pulls the inkwell closed.  It's strangely poignant, I suppose because it's never happened before.  Genius.